PlayStation VR – The Virtual Reality Headset For The PS4

Sony introduces a response to Nintendo’s new “Switch” with the PlayStation VR. It’s not the Sony equivalent, but a timely competitor in the hot gaming market. Find out what Virtual Reality is really like with this exciting new home gaming device by one of the leaders in family entertainment, released this month, in good time for Christmas. 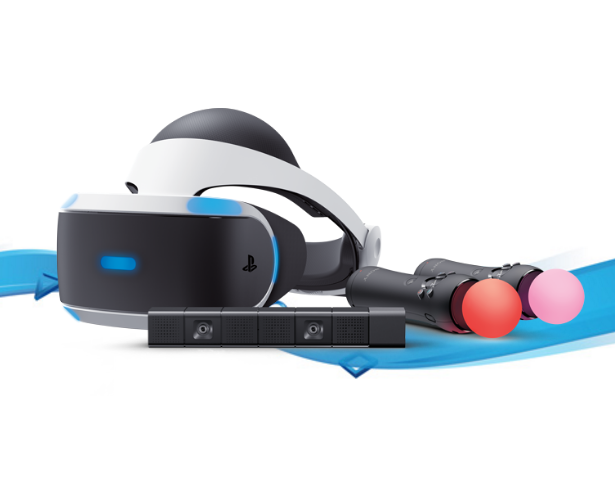 The VR is a headset, allowing the user to become completely part of the game he or she is playing, not merely a remote participant. Sony’s PlayStation VR headset is “balanced, comfortable, and adjustable” in their words. It should fit your head and also another player’s head with just a few changes to setting and fit. One size fits all, but that one size can be re-set for comfort.

Two parts make up the headset: one is the part you actually wear on your head; the other sticks out like a visor, only further away to let your eyes adjust and make room for corrective eyewear as well. It’s not heavy at under 2 lbs.

How does Sony manage to make gaming so realistic? They employ high-definition graphics displayed over an OLED screen measuring over 5 ½ inches. Resolution is 1920 x RGB x 1080. Those letters in the middle simply refer to a color spectrum created by red, blue, and green which can be blended to create thousands of colors; tones that resemble what we see around us every day. That display features a 100° range, about the natural range as far as one’s eyes would move while gaming from the sofa on a large screen with a remote joystick.

As you can see, there is some gear required in order for the VR to work. First, the PlayStation is not included. Second, you will need at least one if not two types of joy sticks; they don’t come with the VR, but since you own a PlayStation already at least one of them is in your gaming collection. The VR is just a virtual reality accessory which extends and enhances the value of PlayStation, making gamers feel like they are right in the game.

While some home entertainment systems can be used for other purposes, the PlayStation VR is all about games. There was no other motive for making the PlayStation VR than to position players right inside the action they enjoy and introduce them to new games worth that sort of immersion. This is not a new type of PlayStation but the PS improved.

Get right into combat mode with various STAR WARS missions like Battlefront Rogue One: X-wing VR Mission where your job is to travel into an unknown part of space to pick up scientists conducting research. Games are sold separately.

Other games available for the Sony PlayStation VR include Batman Arkham, 100-ft Robot Golf, Ace Combat 7, GNOG, and Battle Zone. If you are familiar with any of these series, become reacquainted today.

You can probably find this new toy in stores for about $700. That’s right now. With Black Friday at the end of November in the United States plus pre-Christmas and Boxing Day Sales on the horizon, it might be a good idea to save up for the VR just a little bit longer. You might not get it for Christmas but as a post-Christmas present worth waiting for.

Bear in mind that if you’ve chosen not to buy systems like this until now because you were waiting for them to become more realistic, you’ll have to add the cost of a PS plus joy sticks and games to the overall price.