Comments Off on HP Spectre Laptop

Consumers will get the feeling, reading descriptions of the HP Spectre, that its designers wish they were in a different profession They don’t sell it like a piece of electronics as much as a work of art, its image enhanced by moody lighting. Take all of the fancy words and lights away and what do you have? Well, actually, it’s a pretty special laptop, and it should be for over $1,100. 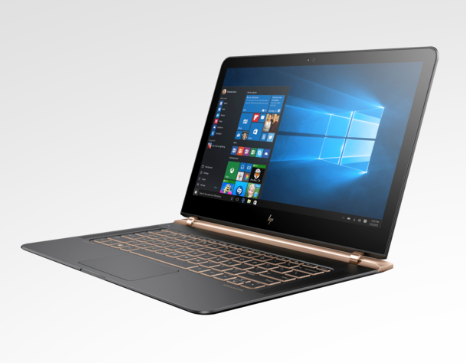 Never underestimate the skinny guy. He has muscle, but it’s long and lean. So, too, does the HP Spectre. One of its foremost visual features is how slender it is and, thus, how light. Lacking bulk in any tangible way, it’s designed for mobile use and to take up very little space at home. It’s just 10.4 mm – the skinniest laptop worldwide.

The HP Spectre was made to be the best but not the most economical. That being said, they didn’t use gold but aluminum and carbon fiber. Gold would have been heavy, even if it was hammered to 10.4 mm. Carbon fiber and aluminum are light and tough. Add scratch-resistant Gorilla Glass, installed here from edge to edge, and you have a machine that can be dropped without breaking. Again, given the price, don’t test that theory from a 2nd-storey window.

Check out the Intel Core Processor, i5 or i7, a customer choice. That’s why the price only starts at a little over $1,100; customization could make it higher. An i7 processor is faster than an i5 and it comes with more memory, ideal for the writer or artist storing large amounts of information and working in coffee shops. Few professional writers could afford the price, but maybe you’re one of the prolific and well-paid writers who can.

A Pcle SSD is also a revolution in the business of computer speeds. With the SSD, computer experts say you lost some speed in the transfer of memory to the processor, but not anymore. Select the i5 or i7 and this Pcle will make the whole system run much more quickly.

Writing in the Dark

Do you write at night with the lights out like a disobedient child reading by a flashlight under the covers? Such dedication deserves a break and you get it with the backlit keyboard. Backlighting helps you find keys in dark environs, supports individuals with vision problems, and is generally cool.

So is Cinderella’s glass trackpad, although this is another breakable thing. Then again, chances are you won’t drop something heavy onto it. Most people spill their coffee and drop crumbs over a computer keyboard if anything. So, have your fancy features without fear they will be fragile.

Unfortunately, the hinge on a laptop between the screen and keyboard gives away the practical purpose of your beautiful machine. You can’t deny it’s meant for work, not for show; however, HP has created a hidden hinge, one you can’t see without looking for it. They say it was inspired by expensive furniture which also tries to hide its functional nature.

How is HP’s safety record? Designers of electronics have been faced with many problems over the years associated with overheating in particular. In response to those challenges, they have come up with a cooling system which allows the internal parts to operate at their best without melting.

You should still avoid placing this machine on your lap so that body heat doesn’t make the laptop too hot; a table is better or place the device on a flat surface before putting it on your lap. Additional hyperbaric cooking sucks in cool air as well as letting out the heat. Never cover vents or these cool-air intake sections.

Consumers complain about their short-term memory all the time, but HP doesn’t make excuses for forgetting a face or a name. In fact, they don’t have to because 8 GB of memory won’t let them. There’s lots of room on here for storage and with such a lot of media one might wish to store, that’s a good thing.

Allow yourself a moment to be impressed by the visual clarity of images and the crispness of Bang & Olufsen sound. Put them together to watch action movies and concerts through stereo speakers. The battery runs up to 9 hours, so you’ve got plenty of time for a movie marathon before you have to plug in at the C-Type USB. Four batteries have already been installed.